skip to main | skip to sidebar

Big Dood on the Big G's; or, Standing on the Flapjacks of Giants

To Shea Hey's sensational stable of stars, namely Cannatar, Fred Coupon and myself, I'm pleased to add the Big Dood. 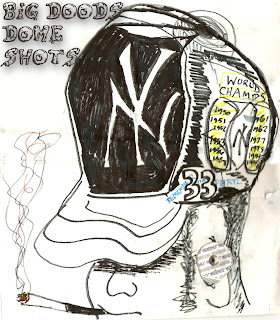 Above artwork by none other than Frownie
Here, in hopefully the first of many missives from the man, the Big Dood offers his thoughts on Big Blue:

Anyone who knows me, knows that I enjoy a season of Jints football almost as much as a big stack of tasty flapjacks hot off the griddle. But let’s not bang our knives and forks on the table toooooooo eagerly. Let’s take a deep breath. And reflect.

To a good many Giants fans, the ending to last season was doubtlessly a bitter disappointment. Fair enough, I suppose, but I’m here to send a wakeup call to everyone who cried themselves to sleep after a one and done ouster at the hands of the Eagles: It’s all disappointment from here on out. This truth should have risen from the ashes as the dust settled in the aftermath of Super Bowl XXZXXZXZSEQR (did I get those Roman Numerals Right?). To quote Christopher Walken’s character in True Romance “that’s as good as it’s gonna get. And won’t ever get that good again.”

By all rights, the New York Giants should never win anything else again. In the interest of balance, they ought to have tumbled into the bowels of the earth and been left to stumble over and upon one another (for at least a few seasons) in abject misery.

Or better yet, they should’ve simply ceased to be, disappearing in streaks of light and vapor behind falling sheets of confetti in the canyon of heroes.

After perpetrating their improbable heist of the New England Patriots’ nineteenth win of that year, like some super-significant paranormal artifact, or beautiful woman held against her will, the appropriate ending was not a series on-field speeches, handshakes and trophy presentations, but rather a mad dash escape to safety while the stadium and perhaps the entire NFL collapsed into oblivion. It should’ve all ended there in Arizona. And as Giants fans, we’ll be forever retreating to the bathroom, chasing that cocaine first hit high, so long as we should choose to care anymore.

But perhaps that’s really the point anyway. Caring too much about sports is a bad practice. Nothing wrong with enjoying games of course, but allowing a particular team’s performance to drastically alter one’s temperament, particularly where it might drive us to surliness, or unhappiness, is the mark of a regressive consciousness. Peace and happiness are not predicated on circumstance. They must be deliberately sought and cultivated from within. So deciding to be bitterly angry if our favorite team fails to achieve a set of rather difficult and (from a probability standpoint) unlikely goals is idiotic. In doing so, we abdicate the responsibility of our own contentment and hand it over to a group of athletes – we barely even really choose which athletes – and allow our emotions jerked about at the whim of a bouncing ball. It’s something like deciding to clip a set of jumper cables to our nipples and saying: “This may hurt now, but one day, hard to say when, someone will surely come along and take these off for me and then I will feel good again. At least until they put them back on a while later. So I’ll just wait patiently for that day. Thanks.”

In 2007, shortly after the Jints turned in a horrendous performance against Minnesota, I calmly decided that I just didn’t give a shit if they lost anymore. I decided then, that I would celebrate great athleticism as much as any worthy human achievement. I still enjoy Giant victories (and surely screamed with glee from the window of Coachie’s apartment when they beat the Pats), but I refuse to sulk away another Monday after Manning forgets which team to throw to.

So my official prediction for 2009 Jints football is: they’re going to keep playing these damn games for as long as I plan on living, so what difference does it make anyway?

But just because I refuse to stumble when they may stumble doesn’t mean I don’t pay attention. So I’ll offer a few observations and then be on my way:

1.) If Mike Sherridan and Osi Umenyiora are not getting along it’s probably because Sherridan is at least hinting that Osi’s starting job is not guaranteed. And why shouldn’t he suggest as much – Matthias Kiwanuka is turning into a splendid DE and looks more like the every-down lineman with Umenyiora more the passing down specialist at this point. Even as a rotational player, I think Kiwi will have a huge season. Not sure if I expect the same from Osi.

2.) It’s quite possible that among the draftees, Smith’s and Hixon’s, the Giants have not found a replacement for Plaxico Burress. At least not early, or at all, this season. I’m ok with that. The Giants didn’t trade for Edwards, Boldin or Tory Holt because they don’t need to win it all this year. They are young almost everywhere and will be good for a long time because Jerry Reese knows to draft (see 2005 where he grabbed Webster, Justin Tuck and Brandon Jacobs with only 4 total picks, or 2007 which netted Boss, Ross, Alford, Steve Smith and Ahmad Bradshaw). Someone’s gonna step up between Nicks, Manningham, Barden etc.

3.) If Antonio Pierce looked old last year, and he did, he’ll figure to look worse in ’09. The Giants will have a hard time with all the pass-catching backs and tight ends in their division. Boley was brought in to help out here, but he’s missing game one, hasn’t really practiced and will need time to get in sync. The rest of the linebackers don’t look like much. We haven’t had a good linebacker since Jesse Armstead. I’m expecting to see a lot Westbrooks and Whittens running wild in the defensive backfield unfortunately.

4.) Brandon Jacobs, while a joy to behold, always strikes me as a knee injury waiting to happen. He runs so high and goes looking for contact that he’s as much of a liability to himself as a weapon for this team. I’m sure he’ll miss at least a couple of games and can only hope those come somewhere in the middle of year, against non-divisional opponents, rather than round one of the playoffs. With Jacobs, the Giants fear no defense. He and Chris Snee are the crazy, mean spirited counterpoints to the likes of James Harrison, Haynesworth, Lewis et al.

5.) When the Giants have been at they’re best these past two seasons, they’ve been a pretty good combination of lucky, well disciplined and tough as hell.

Let’s look back to October 26, 2008. This important date gives us a perfect little snapshot of the Coughlin/Manning Giants (seems the best way to designate this era). On this particular Sunday afternoon, the Giants defeated the eventual NFL champions in front of the biggest regular season Steeler crowd ever. This game is notable for a number of reasons:

The Steelers had won 9 straight home games against NFC opponents.

Plaxico Burress was benched by Coughlin in first quarter for missing a mandatory treatment sessions the previous Saturday.

Santonio Holmes (I hope it was worth it) was serving a marijuana related suspension that day. Somehow, the nature of Holmes’ suspension (as noted by Phil Mushnick) was never discussed during the telecast. Burress, on the other hand, whose status was quickly shifting from NFC title game hero to pariah, for previous fines and NFL disciplinary action earlier in the season, was the go-to cutaway shot on the sideline as the Giants’ offense failed to find the end zone early.

And yet, despite a 4 to 0 turnover ratio, despite controlling the ball for almost ten minutes more than their opponents and despite physical superiority on both sides of the line of scrimmage, the Giants were regarded as lucky to have escaped with a victory on the road because Greg Warren went down with a blown knee and left James Harrison to long snap a ball over punter Mitch Berger’s head for a game tying safety. Never mind the fact that Eli Manning pushed down the short field and found Kevin Boss for the game winning score with under 4 minutes left to play on the road. I’d argue that the Steelers were lucky that one or more of Roethlisberger’s interceptions weren’t returned for scores or that he wasn’t sacked seven times and concussed.

My overarching opinion is that this team, Plax or no, can still deliver a few of these sorts of games. I think they’ll still be able to push other teams around and score late in games. I also expect a slow start, with two early divisional games and a new coordinator on a defense that’s had a lot of injuries and not a lot of regulars practicing.

I think the Jints will get a head of steam late and make the playoffs, although won’t ever appear to be the juggernaut they looked like for much of last year. I think they’re a wild card team, behind the Eagles. I think they’ll relish an underdog role that they always seem to create for themselves by periodically falling on their own faces.

I can see them rolling over in the playoffs, or rolling to another Super Bowl.

I don’t see them pulling off the most exciting victory in Super Bowl history.

Sorry Jints fans. Not happening twice in our lifetimes. Consider whatever else you get after February 08 just syrup on the flapjacks.

Dig in. And don’t take anything too hard. 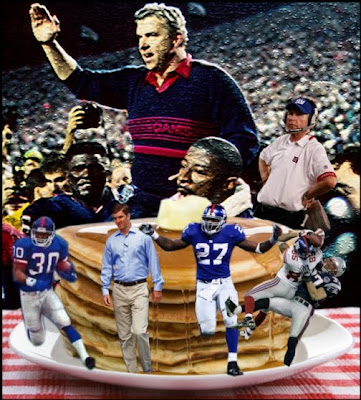 Welcome aboard, Big Dood. Excellent post. Some good insights about the Giants along with an important reminder about putting it all in perspective.

I have no words to describe my feelings when i look at that original frowns creation...remember the deryl indeed.

"Regressive consciousness"? Whoa! I thought this was sports blog? Jetah is the king of New York, you mook

That's not a creation, YJ, it's a Masterpiece of Trubism. Abstract Aht from a great Trubist masta.

Nice post, Dood, but I'd suppose you could muster up a little more care for the final result. Giants could win some big games, they could disappoint in the playoffs. Meh.

Your lecture about caring too much about sports misses an important point to me. That professional sports franchises are public trusts, and folks who run them should be held accountable to the public for that reason. That's a decent enough reason to care about the effort, if not the final result.

Anyway, good to have you around if you're going to pay this much attention.

AND I HOPE IT WAS WORTH IT, SANTONIO YOU F*CK!

The G's Behind the Screen