skip to main | skip to sidebar

If we aint getting mathematics then somethin got to give 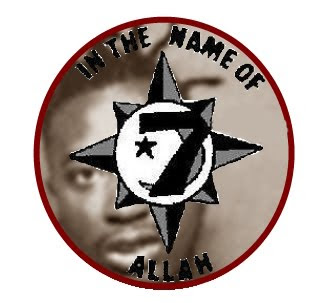 Bryman comes throo with an excellent analysis of LeBron's proposed jersey number change. LeG.O.D.D. has indicated that he will rock #6 next season, explaining, "My second-favorite player was Julius Erving, and he wore No. 6. I wore 32 in high school because Dr. J wore it at first. My first child was born on Oct. 6, it's my Olympic number, my second child was born in June."

A tad convulted but reasonable nevertheless. But the science of numerology is not to be trifled with by amateurs. Has LeBron consulted with professional practioners? Pros like Prodigy, "fuck the myths, the science of numbers is how I live, if we aint getting mathematics then something got to give." (free the P!) Or Ghostface, "it's manifested, the Gods work like appliances, dealing in my cypher I revolve around sciences." The ideas that the Five Percent Nation associate with each of the numbers 1 throo 10 are explained in Brand Nubian's "Allah and Justice." The number 6 is associated with "equality."

However, LeBron could be taking a page from Joe Girardi's book. Girardi took the number 27 upon becoming the Yanks' manager, symbolizing his quest to bring the thirsty axe-spray masses a 27th championship. LeBron could be recognizing that he has not achieved Godly status just yet, and will wear number 6 until such status is attained.

Either way, it is good to see LeBron shedding his Jordan idolatry. The search for an identity of one's own is an essential step on the path to maturity. As No I.D. titled his classic, "accept your own and be yourself."

A warning for LeBron tho, for through such research he will feel the joy and the hurt.
Posted by Coachie

The G's Behind the Screen